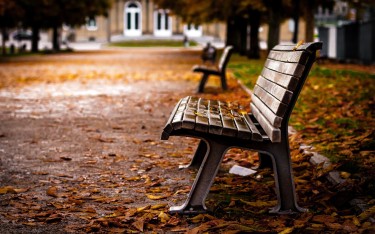 We were in for a fun time. Well my mother-in-law and I anyway. Maybe not so for my husband Dave. But he’s a good man.

Our destination was central Missouri, specifically a quilt shop. Mom, we were close enough that I considered her my mom too, were both fabriholics. Dave would always enter the shop with me to size it up as to how long I might be. A big shop=a long time, small shop=only a short time.

Before he exited, he always said the same thing, “Take as long as you like, there is a park bench outside calling my name. I’m conducting a study on the park benches of America. I’m thinking of writing a book that I know husbands would appreciate. I’ll include the GPS stats of where the best ones are located.”

Inside, Mom and I were finishing up our purchase when the alarm went off at the fire station across the street. It was deafening and encouraged us to stay in the store a little longer.

As we chatted with the shopkeeper we learned the fire department was made up of volunteers. The alarm raged on for what felt like hours instead of minutes. Dave, being the trooper that he is, remained manning the bench getting a front row seat to the action.

A pick-up roared up from out of nowhere parking at the fire station. The driver leaped out running inside the station. The garage doors flew up revealing the red engine ready to go. But it stayed there.

Soon after, a second pick-up rumbled to the scene and thundered to a stop… The first arrival stuck his head out of the window of the fire truck, “Have you got the keys?”

Apparently he did. The shrieking alarm was turned off which made the silence as deafening as the alarm had been. The fire truck came to life and lumbered off to the emergency. We were relieved to know this small town had same day service.

To date, my dearly beloved hasn’t written a single word of his book. Such a shame as so many men would find it a valuable resource.

This site uses Akismet to reduce spam. Learn how your comment data is processed.

A journey of formation to become Adam

One Day Wonders with JBK

All the good things about life in the Country

A daily selection of the best content published on WordPress, collected for you by humans who love to read.

Postcards from the Heartland

Apps for any screen

The latest news on WordPress.com and the WordPress community.